Thank you to Joshua Gans and his CoreEcon blog for finding this piece by Paul Farrel at MarketWatch:

'Unified Theory of Everything Financial'

Quietly hidden in Adams' groundbreaking work is a financial formula so simple it rivals Einstein's E=mc2. In its original form Adams' formula was apparently so heretical and so explosive that no major house would touch it when he proposed publishing it as a one-page book. After initial rejections, he announced sadly that "if God materialized on earth and wrote the secret of the universe on one page, he wouldn't be able to find a publisher" either.

Fortunately for America's 95 million investors, Adams' secret nine-point formula was finally revealed in "Dilbert and the Way of the Weasels." Notice its simple brilliance in the exact reproduction of his formula:

Adams boldly states that this is "everything you need to know about personal investing." In just 129 words, nine simple points, one page you have the unabridged "Unified Theory of Everything Financial." That's it. Everything!

The truth is, most investors have little or no interest in Wall Street's casino action; all the time-consuming research, the sophisticated stock-picking tricks, the costly trading necessary to play in a market drowning in 10,000 stocks, 18,000 funds and more than 100,000 bonds. Most investors have jobs and kids as their top priority...

Folks, before you dismiss the idea of Adams winning the Nobel Prize in economics, please remember, there is precedent: Back in 2002 the Nobel committee ignored the usual suspects and picked a psychologist. So there's hope that sometime in the future a brilliant humorist can also one-up all the pedigreed pundits in this "dismal science."

Adams predicted that "someday an economist will win the Nobel Prize for discovering the exact dollar-per-weasel equation that explains our world." But it's now obvious that he's already done much more! Adam's formula would eliminate thousands of weasels from Wall Street, vastly improving the efficiency of America's financial markets, while his "Unified Theory" would improve the wealth-building power of all investors.

If you want more information on how you and your kids can win the prize, please read 1989 winner Michael Bishop's "How to Win the Nobel Prize." The good doctor innocently calls himself an "accidental scientist." Also read "The Beginner's Guide to Winning the Nobel Prize" by 1996 winner Peter Doherty, an Australian veterinarian who says the winners come rather unpredictably from "unlikely backgrounds, one-room schoolhouses and concentration camps," yet all have one thing in common, a "fire in the belly."

One final word: Remember that we all live in parallel worlds -- in politics and religion, in art and science, in our dreams and in reality -- where nothing is ever impossible, where you can achieve your wildest dreams, where your investments succeed simply by using simple formulas and by living with "fire-in-your-belly."
In that world, Scott Adams, Dilbert, you and I can all win a Nobel Prize in "Everything Financial!"

Posted by Andy Matthews at 2:10 PM 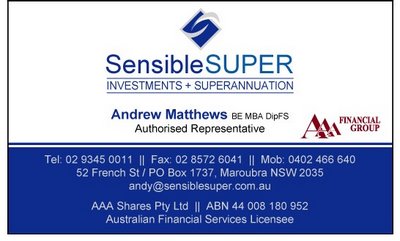 Thank you to Donny at DREAMVISION DESIGN for putting this together for me...
Posted by Andy Matthews at 9:57 AM