Below are some highlights from author Brent Schlender’s recently unearthed conversations with Steve Jobs. (from FAST COMPANY)
BY BRENT SCHLENDER | APRIL 17, 2012 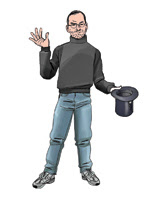 "The thing that I really love about Pixar is that it's exactly like the LaserWriter. I remember seeing the first page come out of [Apple's] LaserWriter [in 1985]--which was the first laser printer, as you know--and thinking, There's awesome amounts of technology in this box. There's the graphic engine, there's the controller, there's the PostScript software, awesome amounts of stuff. And yet no one is gonna care and they don't need to know; they're gonna see this output, and they're gonna go, I think that's great. They're gonna be able to judge for themselves...

...THE PAYOFF OF A GREAT EMPLOYEE

"In most businesses, the difference between average and good is at best 2 to 1, right? Like, if you go to New York and you get the best cab driver in the city, you might get there 30% faster than with an average taxicab driver. A 2 to 1 gain would be pretty big.
"The difference between the best worker on computer hard-ware and the average may be 2 to 1, if you're lucky. With automobiles, maybe 2 to 1. But in software, it's at least 25 to 1. The difference between the average programmer and a great one is at least that...
READ FULL ARTICLE AT FAST COMPANY
Also, see The Lost Steve Jobs Tapes
Posted by Andy Matthews at 4:32 PM